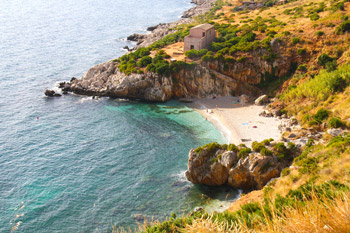 The holiday homes By “Un mare di Blu”, located in San Vito Lo Capo, Macari district, offering the tranquility of a relaxing holiday with sea views in a quiet and peaceful setting just minutes from the tourist flow of San Vito Lo Capo, with its beach, shops, crafts, restaurants.

The location is ideal for visiting the coast and the most beautiful areas of western Sicily.

The area has a huge variety of beaches, all different in their shape. The most famous are the beach of San Vito Lo Capo, the Bue Marino beach (Winner of the most beautiful beach of Italy 2015 by the League environment), the peaceful and crystal beach of Santa Margherita with its free service train,  discover isolated corners of the sea and the Zingaro Nature Reserve from the wild and unspoiled landscapes, the reserve of Mount Cofano with its unspoiled seaside views, Isulidda with its breathtaking sunsets.

Erice watches over the port of Trapani from the legendary mountain of Eryx, situated a giddy 750m above sea level. It’s a mesmerising walled medieval town whose mountain charm is enhanced by the unpredictable weather that can take you from sunny afternoon to foggy evening in the space of a few minutes. The town has sweeping views of the sea and the valley below, and is home to Sicily’s most famous pastry shop, Maria Grammatico. Erice has a notorious history as a centre for the cult of Venus (Astarte to the Phoenicians and Aphrodite to the Greeks). The mysterious Elymians claimed descent from Venus’ famous Trojan son, Aeneas, who mentions the sanctuary as a holy landmark in the Aeneid. Acolytes here practised the peculiar ritual of sacred prostitution, with the prostitutes accommodated in the temple itself. Despite countless invasions, the sacred site long remained inviolate – no need to guess why! 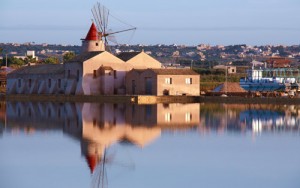 Along the coast between Trapani and Marsala lies this evocative landscape of saline (shallow salt pools) and decommissioned mulini (windmills). The salt from these marshes is considered Italy’s finest and has been big business for centuries; today, only a cottage industry remains, providing for Italy’s more discerning dinner tables. The best time to visit is summer, when the sun turns the saltpans rosy pink and makes the salt heaps shimmer. In winter, the heaps – covered with tiles and plastic tarpaulins to keep out the rain – are considerably less picturesque. The most attractive stretches of coast are protected within two wetland preserves: Riserva Naturale Saline di Trapani e Paceco to the north near Trapani, and Riserva Naturale di Stagnone to the south near Marsala. The latter encompasses San Pantaleo island – home to the noted archaeological site of Mozia – and the larger Isola Lunga, which protects the shallow waters of Stagnone lagoon. 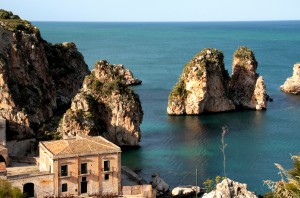 SCOPELLO: The hamlet of Scopello couldn’t be any more charming if it tried. Built around an 18th-century baglio (manor house) fortified with a high wall and huge gates, its white houses and smooth-stone streets look like they belong in a 1950s Italian movie. In fact, the historic tonnara (tuna-processing plant) on the shore below is a popular film location – the 2004 Hollywood blockbuster Ocean’s Twelve was filmed here, as was an episode of the Inspector Montalbano TV series. Favourite pastimes in Scopello include sipping a coffee on the main piazza, hiking in the nearby Riserva Naturale dello Zingaro and swimming in one of Sicily’s most idyllic coves, Spiaggia dei Faraglioni, which is next to the tonnara. Try to avoid Scopello in August, when it becomes unpleasantly crowded.

CASTELLAMMARE DEL GOLFO: Castellammare del Golfo is an attractive seaside town on the north-western coast of Sicily, between Palermo and Trapani. The historic little fishing port has a very picturesque location, below steep mountain slopes, with a handsome curved harbour at the foot of a small headland topped with a castle. Castellammare is just touristy enough that visitors don’t feel out of place, but it isn’t overcrowded with hotels and it has an authentic Sicilian ‘feel’. 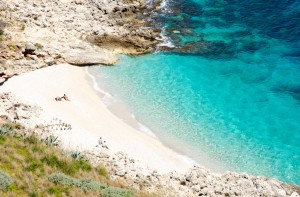 Cliffs drop precipitously into the azure sea , mountainsides rise steeply up to heights of 1,000m and the series of delightful pebbly beaches with transparent turquoise water are as lovely as you can find in the Mediterranean. (www.riservadellozingaro.it)

ISOLE EGADI: The Egadi Islands (Isole Egadi in Italian, also called Aegadian Islands in English) are three islands off the western coast of Sicily, close to Trapani and Marsala. The islands make an attractive holiday destination. The Egadi Islands aren’t much known to non-Italians, and outside the peak Italian holiday period of July-August, tourism isn’t too intrusive. There are services for tourists – good places to stay, restaurants, cafes, shops, bike hire and boat trips – but you’ll still encounter a very authentic and welcoming local atmosphere. It is really quite remarkable how easily and quickly you find yourself in a different world: pottering past the rickety fish stalls where Favignana’s fishermen sell their catch, or sipping wine at a cafe table as a local wedding spills out from the Chiesa Madrice into the wide piazza, where small children play on their bicycles.. (www.egadiweb.it)

FAVIGNANA: Favignana island remains unspoiled, little known and therefore saved from mass tourism. In a breathtaking landscape alternating rugged cliffs, sharp rocks, sand soft and white which rest harmoniously in a sea of a thousand nuances. The island is small, it can run safely by bicycle and this allows us to appreciate the scenery: golden land, and often dry, surrounded by the reflection of blue sea. Wandering the streets of the village (the only country on the island) and in the shops you can exchange a few words with the people, always friendly and smiling.. 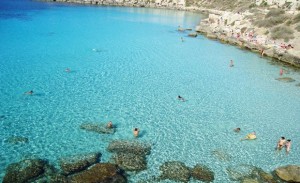 Has the form of butterfly, the most beautiful beaches are located to the east (Cala Azzurra, Cala Rossa). The island retains a Norman castle. Favignana is also wellness: sludge that can be drawn from clay of Cala Azzurra makes the skin soft and smooth for days, as if you had a bath in milk and not in salt water.

LEVANZO: The smallest of three islands which make up the Aegadian Islands, it’s so small you can explore it on foot in a day, but so lovely and rich in food and history. A rocky, dry island with scrubby trees, little bays, creeks, some sheer cliffs and oh so blue crystal clear seas, it’s about a half hour boat ride from Sicily.The port town is made up of houses painted white to deflect the hot sun, and you’ll find great little cafes with wonderful views of the water. Go for a walk around the island, go for a swim, and head to the Ristorante Paradiso for lunch. It’s one of those magical places where there’s no menu because it all depends what’s been caught that morning. 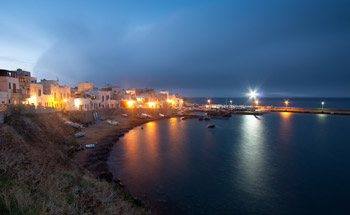 MARETTIMO:Marettimo, the westernmost island of the Egadi Islands is large-part unspoiled, beautiful with it pure rock coastline, where it hides about 400 caves all along its coast, as well as small beaches reachable only by boat. The island is a rocky promontory extended for about 7 km, reaching 686 meters above sea level at the summit of Monte Falcone. Here terrestrial flora is particularly rich, counting about 500 different plant species. The fauna however, is a bit less diverse, but prolific in different wildlife (rabbits, wild boars, reptiles and migratory birds).

TRAPANI: (www.trapaniwelcome.it) Located on the western coast of Sicily, Trapani is a fishing and ferry port with a long history. Nowadays the town is renowned for its fine seafood and Sicilian cuisine, and makes a good base for tourists exploring this part of the island.
Trapani occupies a low-lying promontory with a curving harbour which, combined with its position at Sicily’s western tip, made the town into an important hub for traders and travellers. Today the ferry port is still a base for journeys out to smaller islands like Pantelleria, Favignana, Levanzo, Marettimo.
Although not much trace is left of Trapani’s ancient history, the town was a Phoenician trading port, ideally placed for commerce with Africa, Naples and the western Mediterranean. Trapani was an important town throughout the Middle Ages, and it is the medieval phase of the town’s past which is most evident in the old town. After bombing during the Second World War, much of the town was rebuilt in modern way. But the old town, extending westwards with sea on either side, is still worth a visit. Old palazzi, some crumbling and some grand, cluster along the promontory around the central Corso Vittorio Emanuele. Out at the tip of Trapani’s headland is the Torre del Ligny, a tower which was part of the 17th-century Spanish defences and now hosts a Prehistoric Museum. A stroll around the largely-pedestrianised old town gives travellers a chance to admire the town’s old buildings and landmarks such as the offshore fortress called the Torre della Colombaia or Castello del Mare (Sea Castle).

MARSALA: Many know about its sweet dessert wines, but few people realise what a charmer the town of Marsala is. Though its streets are paved in gleaming marble, lined with stately baroque buildings and peppered with graceful piazzas, pleasures here are simple – a friendly passeggiata (evening stroll) most nights, plenty of aperitif options and family-friendly restaurants aplenty. Marsala was founded by the Phoenicians who escaped from Mozia after it was defeated in 397 BC by an army led by Dionysius I of Syracuse. They settled here on Capo Lilibeo, calling their city Lilybaeum and fortifying it with 7m-thick walls that ensured it was the last Punic settlement to fall to the Romans. In AD 830 it was conquered by the Arabs, who gave it its current name Marsa Allah (Port of God). 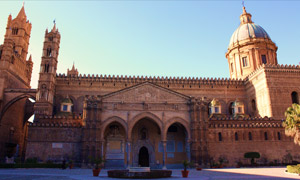 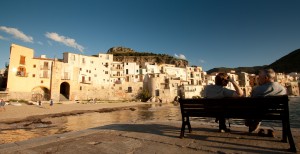