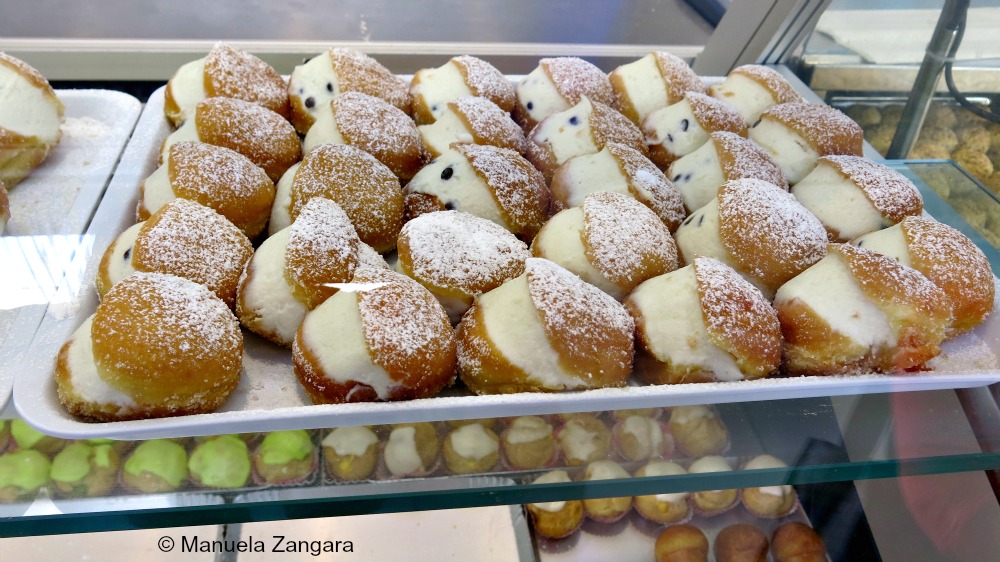 “It all started with la graffa, a Sicilian fluffy donut jam-packed with sweetened ricotta and dusted with sugar. When I was 11 years old, my parents sent me to apprentice with a barber. I spent my weekly earnings on movie tickets and graffe. With a sugar addiction and empty pockets, it was apparent that I was meant to be a baker not a barber”, said Vito, the owner of Laboratorio Dolci Peralta.

Peralta has been open for more than 32 years. It churns out traditional Sicilian desserts like biscotti di mandorle (cookies made from a base of almond paste),cassate and cannoli. I spent a morning in the kitchen with Vito and his daughter/heir apparent Lorena, talking, photographing and eating.

The marble countertop was a field of moon, star and ball shaped morsels made from pasta di mandorla (almond paste). Vito makes traditional flavors of lemon and pistachio and new combinations like tiny globes with a fresh cherry center. Lucky for me, it was cherry season.

Next stop, cannoli! The dough is rolled out, wrapped around wooden tubes and piled on a tray before frying.

Sheep’s milk ricotta, candied orange peel and confectioners sugar filling is mixed and set aside. Unlike most pastry shops outside of Sicily, here shells are filled on order. This combined with the skill of the baker guarantees a delicate crisp pastry.

Onto the king of Sicilian desserts, cassata siciliana, made with layers of liquor-soaked sponge cake and a mixture of sweetened sheep’s milk ricotta and dark chocolate bits. Tin pans are lined with the sponge. The luscious cheese combo is smoothed on top and the cassata is flipped over.

Vito prides himself on making “proper cassata” which equals an elaborately decorated work of art. After the flip, it’s encased in a strip of pale green marzipan, glazed with white icing and adorned with crystallized oranges, pears and cherries. The glistening fruit wedges appear like flower petals.

And last but certainly not least is frutta martorana. Painted in vibrant colors, these marzipan fruits are said to have been created by nuns of the Martorana convent in Palermo for the archbishop’s visit on the Day of the Dead, November 1. He was awestruck by the fruit hanging from trees in the cloister. These sugary treats are now made all the year round but are given to children in memory of the dead on All Souls’ night.

You’ll find Vito and Lorena hard at work, 7 days a week at: